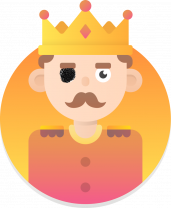 Here’s A King’s Painting Story where he gives punishment to the two painters and rewarded the third painter Why let’s see.

Long ago, there’s a king who was ruling an empire.

The king has one eye working and the other was not there.

In the other eye, the space was empty and skin has taken the place.

He used to reward the artists, poets, and craft men.

But the good thing about the king was he doesn’t tolerate if anyone would praise him falsely.

He believed in truth and he wants his people to be true.

One day he announced in his kingdom that he wanted artists who would draw the best painting of the king.

The king will reward the artist with the one which one must not earn in their life if not then they will be punished.

Painters came from the kingdom and tested their skill and out of which three painters were selected to draw the good painting of the king.

The first artist shows the painting of the king in which the painter had drawn two eyes but the pupil of one eye was not there. After seeing the painting, the king punished the painter and put him in prison for 10 years. The king saw that there is only one eye of the king which has vision in the painting which would depict that the ruler of the kingdom is with disability.

The second artist showed the painting and also taken into prison for 5 years. The picture shows that the king having a vision in both eyes. The king saw that the painting is depicting the wrong image of the king for the reward which the king doesn’t tolerate.

At last, after seeing the last painting the king rewarded the painter. The third artist was so smart that in his painting he draws the king’s face with only an eye.

There is a solution to every problem only the thing is to think hard and apply.

We see in life how we run with our small problems.

But if we face then only we become more perfect.

Thinking and applying in the same direction will always lead to your destination.